In November of 2018, Robert van de Walle and Peter Perez met to discuss the idea of creating a collaborative kinetic piece for Dia de los Muertos. After several months of fabricating a fantastic creature based on the artwork of Mexican artist Pedro Linares, Robert handed off the bike to Peter, who painted traditional and imagined patterns over the surface of the bike. He decided that her name was Iris.

The joint venture was a success! It was decided that Iris should be used as an example for other interested folks to build their alebrije bikes, and that there should be a parade of the amazing pieces at the Windsor Town Green’s Muertos event, on November 1st, 2019.

Robert applied for, and received a grant from the Awesome Foundation of Marin, and was able to offer $500 in prize money to inspire folks to build a sculpture and show up at the Alebrijes Competition bike parade. Below is Robert accepting his check from Victoria Woo, of the Awesome Foundation. 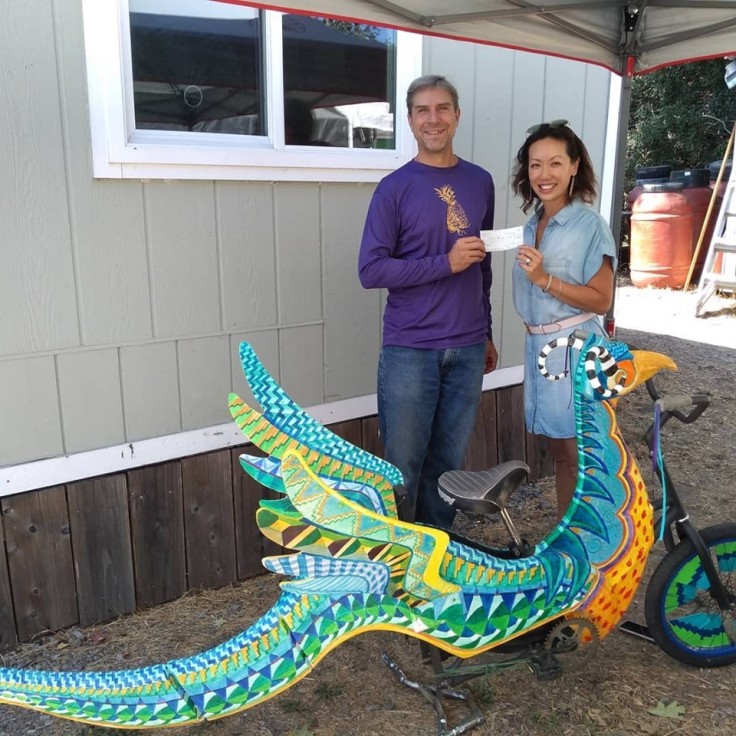 So far, Iris has travelled to the opening of the Dia de los Muertos show at the Sonoma County Museum, and has also been to the Festival de Independencia event, where she was not allowed inside, so was ridden around where the Lowrider cars were presented.

Iris roade with Cali Calmecac students in Sonoma Bike Coalition’s Walk and Roll to school day and visited Windsor High School, where Robert is working with Art teacher, Melissa Jones, to create an alebrije bike with her students.

We look forward to seeing what people come up with for the Windsor Muertos event! See you there!